The Mech-fiber 340 has the ability to feed large numbers of livestock with a single load and it is capable of working under the toughest of conditions, feeding large volumes day-in-day-out. The Mech-fiber 340 sets new standards in ration mixing, offering a high degree of on-farm manoeuvrability. It has a similar ‘footprint’ to the 320 but with it’s deeper body and repositioned cross auger, delivers higher capacity.

Controlled chopping speed significantly reduces torque requirements. A typical power unit is a 90 HP tractor, resulting in a dramatic saving on overall fuel consumption compared with other mixers, despite the larger capacity.

Keenan’s simple two-chain drive system has an unbeatable track record of reliability. A primary drive chain and three sprockets transmit power to the auger and idler. A second sprocket powers the much larger paddle sprocket.

An automatic oiling system can be fitted and is operated by the hydraulic rams opening and closing the guillotine door. This delivers ‘pulses’ of oil to the drive chains, lubricating them to the optimum levels for safety and improved chain life.

The Mech-fiber™ 360 comes fitted with either single axles, tandem bogie axles or for the utmost manoeuvrability, steering axles. The heavy duty chassis is designed to give the driver improved weight transference and improved stability when travelling at road speeds (Single axle reduces payload to 6,500 kg). 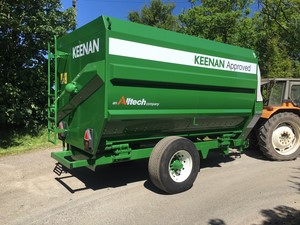 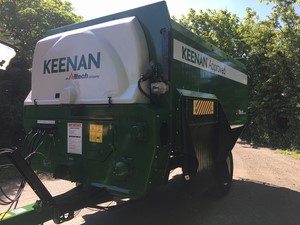 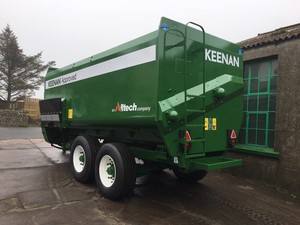